The neuronal mechanisms responsible for food cravings during pregnancy are identified 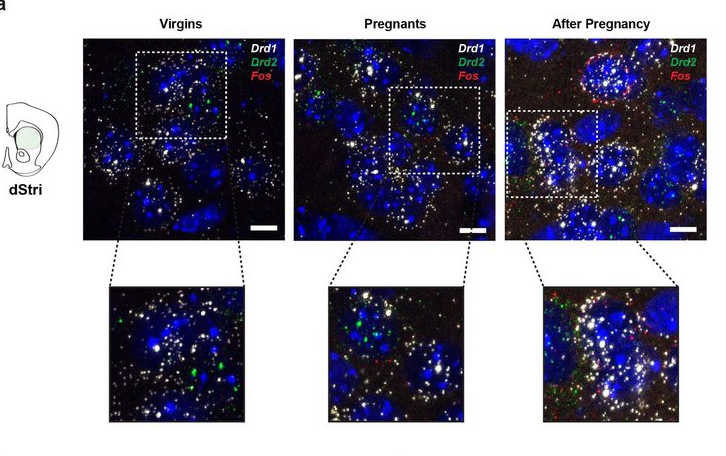 A study led by IDIBAPS researchers shows, in female mice, how pregnancy induces a reorganization of the dopaminergic circuits related with motivation and desire, driving them to eat sweet and high-calorie products

Marc Claret, together with Roberta Haddad-Tóvolli, a researcher in his group, leads a study recently published in the journal Nature Metabolism. The conclusions of the study, which also included Guadalupe Soria and Emma Muñoz-Moreno, from the IDIBAPS magnetic resonance platform, Analia Bortolozzi and Lluis Miquel-Río, from the IIBB-CSIC-IDIBAPS and researchers from the CIBERSALUD, and Emmanuel Valjent, from the INSERM and the University of Montpellier, could contribute to improving clinical nutrition guidelines for pregnant women, in order to ensure adequate prenatal nutrition and prevent the appearance of diseases.

To a greater or lesser degree, nearly everyone has experienced a sudden and uncontrollable urge to eat a particular type of food. These impulses, known as cravings, are very common, particularly during pregnancy. In this phase, the maternal body experiences a series of physiological and behavioral changes in order to create a favorable environment for the development of the embryo. However, the frequent consumption of high-palatable, high-caloric foods, as a result of cravings, contributes to weight gain and gestational obesity, which can lead to negative consequences in offspring’s health.

According to the results of the research, female mice experience changes in the functional connectivity of brain reward circuits, as well as of taste and sensorimotor centers, during pregnancy. Furthermore, like pregnant women, female mice are more sensitive to sweet foods and develop compulsive eating behaviors towards high-calorie foods. “The alteration of these structures led us to explore the mesolimbic pathway, one of the routes of signal transmission from dopaminergic neurons. Dopamine is a key neurotransmitter in motivation or desire behaviors”, comments Claret.

The researchers observed that dopamine levels, as well as the activity of the dopamine receptor 2 (D2R) neurons, increased in the nucleus accumbens, a brain region implicated in the reward circuit. “These findings suggest that pregnancy induces a complete reorganization of the mesolimbic neuronal circuit, through D2R neurons”, points out Haddad-Tóvolli. “Also, these neuronal cells, and their functional alteration, would underlie the appearance of cravings, since, by blocking their activity, we were able to revert the food craving episodes typical of pregnancy”.

Finally, Claret, Haddad-Tóvolli and their team showed that persistent cravings have detrimental consequences in the offspring. Specifically, recurrent cravings can affect the metabolism, as well as the development of neuronal circuits that regulate appetite behaviors, leading to an increase in body weight, anxiety, and the predisposition to eating disorders. “These results are surprising, because the majority of studies focus on analyzing how the mother’s permanent habits, such as obesity, malnutrition or chronic stress, impact the baby’s health. However, our work indicates that short, but recurrent food cravings are sufficient to increase the vulnerability to psychological and metabolic disorders in the offspring”, concludes Claret.

The project received funding from the European Research Council (ERC, H2020 grant no.725004) awarded to Marc Claret. Furthermore, Roberta Haddad-Tóvolli is the beneficiary of a grant from the Marie Skłodowska-Curie Action programme (H2020-MSCA-IF) NEUROPREG (Grant agreement No. 891247).