Oligonucleotide therapeutics as a new class of treatment for brain diseases 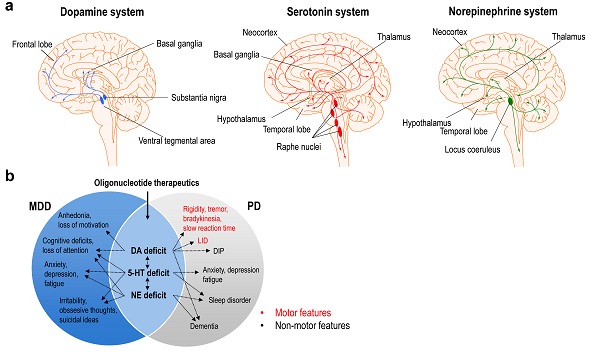 Messenger RNA (mRNA) is becoming an increasingly important target for therapeutic intervention. The mRNA molecule transmits information directly from the genome. Researchers from the Institute for Biomedical Research of Barcelona (IIBB - CSIC) analyze the main strategies to modulate mRNA function in the brain using oligonucleotides.

In an invited review published in the prestigious International Journal Pharmacology & Therapeutics, researchers from the Systems Neuropharmacology group, with Dr. Analia Bortolozzi as the first author and corresponding author, analyze the main molecular pathways involved in depression and Parkinson's disease (PD), and discuss the challenges associated with developing new oligonucleotide therapies.

Depression is one of the most prevalent and debilitating medical conditions. Furthermore, the risk of suicide among depressed patients is approximately 20 times higher than in the general population. Recently, the World Health Organization (WHO, 2018) shows that depression will be the main health problem for the population in 2050, currently affecting more than 300 million people worldwide. Depression is a complex disorder that results from the interaction of genetic, neurobiological, cultural and environmental risk factors (for example, stress as a main risk factor).

On the other hand, PD is an age-related disease, with incidence and prevalence increasing steadily with age. However, the idea that PD exclusively affects older people should be dismissed. The age of onset of almost 25% of affected people is under 65 years and 5 to 10% are under 50 years. The disease occurs worldwide, without notable epidemiological differences, except for a rapid increase in new cases in high-income countries in Europe (GBD in Europe, 2017). The global burden of PD - in terms of death and disability - has doubled in the last two decades. Multiple causes (for example, mutations and / or duplications in different genes, impairment of cellular functions such as energy metabolism, protein degradation, among others) play an important role in the development of PD.

A central feature of these disorders is that they are associated with alterations of the brainstem monoamine systems: dopamine, serotonin, and norepinephrine, which are involved in some of the clinical outcomes of depression and PD. Thus, a deficit in dopamine function is associated with the motor symptoms and cognitive impairments of PD, but also with the loss of motivation and anhedonia observed in patients with depression. The expanding anatomical organization of monoamine systems makes that the molecular, neurochemical, and functional changes occurring at the cell body level in the brainstem can be rapidly translated into changes of activity in the interconnected brain regions thanks to the dense network of monoamine axons. This feature is particularly useful for therapeutic oligonucleotides targeting monoaminergic neurons, since modulation of mRNA expression and function in these neurons can have a strong impact on distal brain areas.

In this review, the authors summarize the molecular pathways involved in depression and PD and review in-depth the main characteristics of the different types of therapeutic oligonucleotides (for example, ASO, siRNA, microRNA, and aptamer), highlighting the latest advances in the optimization of delivery to the brain. The authors emphasize the chemical modifications of the oligonucleotides that facilitate their accumulation in monoaminergic neurons, and subsequent regulation of mRNA expression.