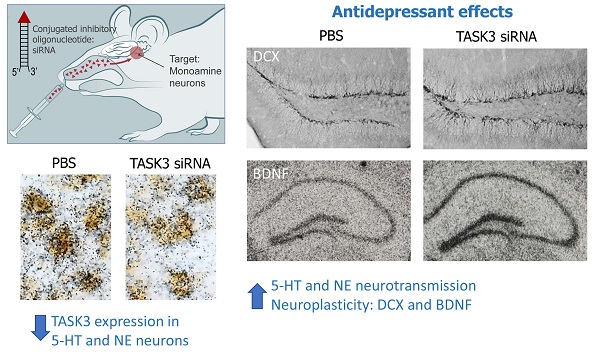 A study recently published in the journal Molecular Neurobiology shows that it is possible to treat depression more quickly and effectively with inhibitory oligonucleotides targeting monoaminergic neurons (serotonin and noradrenaline) than with conventional drugs. These oligonucleotides, molecules formed by a short RNA sequence, block the transcription of potassium TASK3 channel leaving an increased brain monoaminergic neurotransmission.

The study was conducted by Dres. Francesc Artigas and Analía Bortolozzi (IIBB-CSIC, IDIBAPS, CIBERSAM) and funded by the Brain and Behavior Foundation (USA) through the NARSAD Independent Program. In addition, the study has been carried out in collaboration with Dr. JJ Meana’s research group (University of the Basque Country, CIBERSAM). The first two authors of the study are María Neus Fullana (predoctoral researcher at IIBB-CSIC-IDIBAPS) and Dr. Albert Ferrés-Coy (IIBB-CSIC-IDIBAPS).

Depression is the psychiatric pathology with the greatest socioeconomic impact and requires medication and psychotherapy to be treated. The European Brain Council estimates its annual cost in Europe at more than 113,000 million euros. This high cost is due to the high incidence of depression, the long duration of depressive episodes -with a high impact on labor costs- and the low efficacy of current drugs. Understanding the neurobiological basis of depression and finding new therapeutic targets remains one of the main challenges for modern neuropsychopharmacology.

Inhibitory oligonucleotides are molecules formed by short sequences of DNA or RNA that are used in gene therapy as a strategy for silencing or inhibiting genes. In the study published in Molecular Neurobiology, a siRNA (small interference RNA) sequence was used to inhibit potassium TASK3 channel synthesis in serotonin and noradrenaline neurons, identified as a new target for antidepressant action.

Although research with this treatment is still in the preclinical phase, the researchers state that "the results show how new therapeutic strategies could overcome the limitations of current drugs".