Detailed protocol for intracerebroventricular delivery of a modified antisense oligonucleotide targeting dopaminergic neurons in a preclinical model of Parkinson's disease. 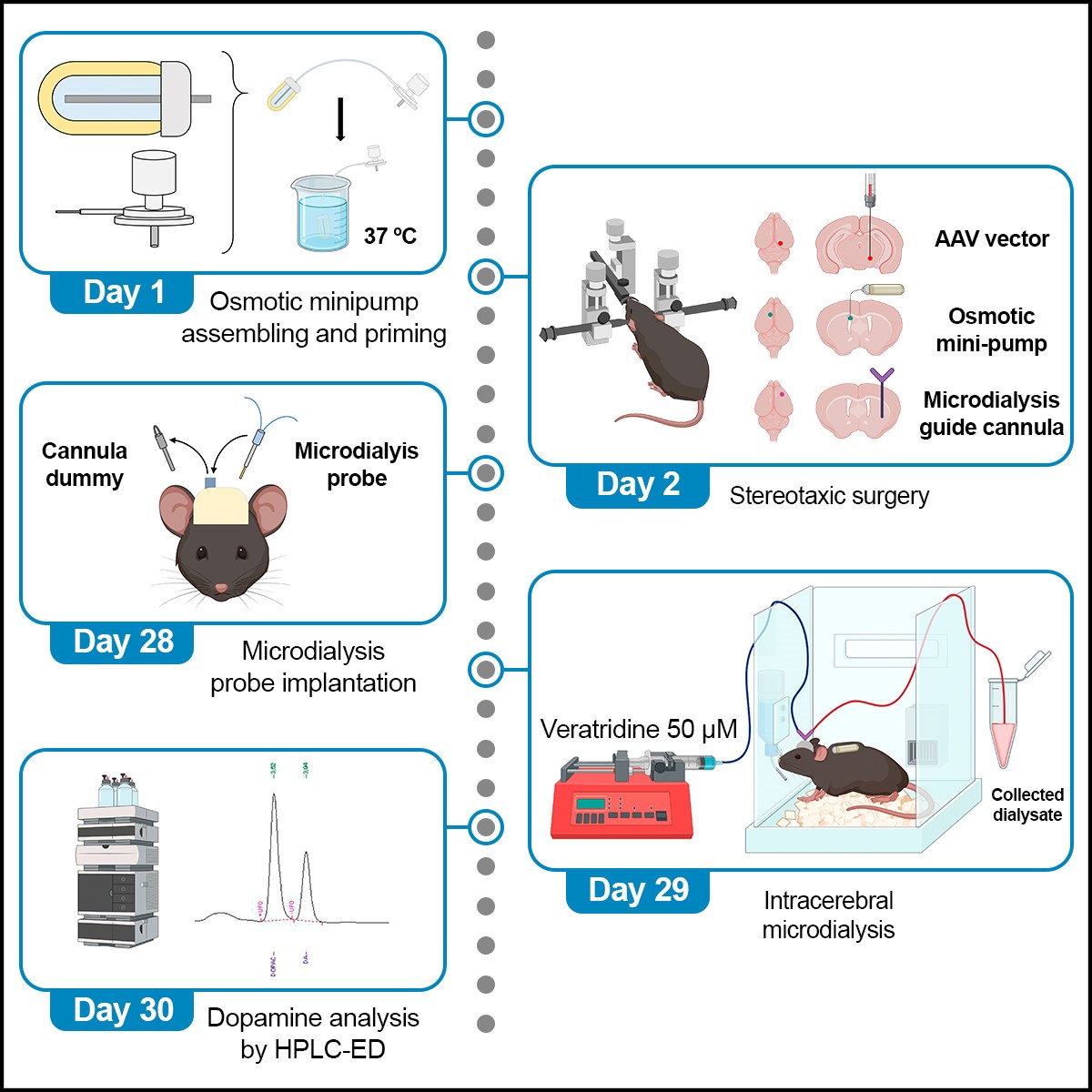 Since the approval of Spinraza, an antisense oligonucleotide (ASO) for the treatment of spinal muscular atrophy in children and adults (https://www.fda.gov/news-events/press-announcements/fda-approves-first-d...), ASOs are emerging as a new therapeutic platform for neurodegenerative diseases. However, their clinical use for brain disorders continues to have two main limitations: effective delivery into the brain and targeting specific cell populations.

The open access journal STAR protocols, Cell Press has published a protocol described by the Systems Neuropharmacology group of IIBB - CSIC and IDIBAPS led by Dra. Analia Bortolozzi. It details the optimized steps to generate a mouse model that produces and accumulates human α-synuclein protein in dopaminergic neurons using an adeno-associated viral vector. Using this preclinical model, we were able to examine the therapeutic benefit of a modified ASO on α-synuclein-induced dopaminergic system deficits, similar to that described in patients with Parkinson's disease (PD), explains Dr. Rubén Pavia Collado, first author of the study.

Advances in cell-specific delivery of an ASO targeting α-synuclein

The α-synucleins -α-, β- and -synuclein- are a family of proteins primarily expressed in neurons and are concentrated at synapses. In particular, α-synuclein is intimately related to the PD neuropathology. The "toxic" reactive forms of α-synuclein are thought to be the early mediators of functional deficits in the dopaminergic system, leading to the subsequent degeneration of these neurons. PD-like animal models are necessary to understand the molecular and cellular mechanisms of the disease and may contribute to the development and validation of new therapeutic interventions.

In this study, we detail step-by-step procedures to generate a humanized mouse model that overexpresses α-synuclein in dopaminergic neurons using an adeno-associated viral vector validated by the Michael J Fox Foundation. One of the advantages of this model is that it does not require genetic cross-breeding of animals to synthesize human α-synuclein. Mice overexpressing the transgene showed progressive accumulation and aggregation of α-synuclein protein in the dopaminergic system, causing cognitive and motor alterations, which reproduce some of the symptoms of the disease.

The protocol also describes the optimization of an ASO sequence targeting human α-synuclein expressed in dopaminergic neurons. The procedure for simultaneous implantation of an osmotic minipump to deliver ASO directly into the lateral ventricles and a microdialysis cannula to monitor dopamine synaptic availability is reported. This protocol can be used to evaluate disease-modifying therapies for Parkinson's disease and other synucleinopathies based on therapeutic oligonucleotides.

Lluis Miquel Rio and Leticia Campa are co-authors in this study. All the authors belong to the CIBER of Mental Health (CIBERSAM, ISCIII).